So at the moment, in between visiting with the folks, I have been reading Cobweb Bride by Vera Nazarian: 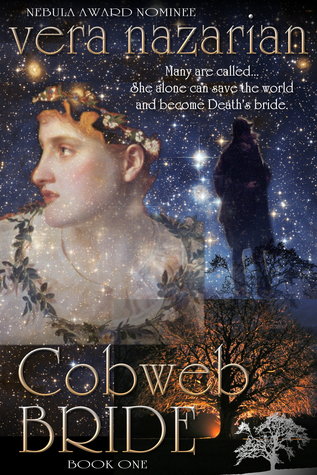 Flor and Regata came into the hallway from the kitchen, carrying the supper main course in a large covered kettle destined for the dining guests of the inn. While Ronna pointed to the side table, they deposited the heavy kettle upon an iron pot rest.

For some reason I keep reading that as “iron pot roast”, which doesn’t sound very appetizing. The main course is a pot roast, though. Oh, by the way, did I mention that the lack of death extends to animals? As you can imagine, the pot roast, being animal matter that can’t die, didn’t turn out quite right …

This is sort of a take on the Persephone myth (one of the characters is even named Persephone, although everyone calls her “Percy”) with a dash of Torchwood’s “Miracle Day” storyline in which no one can die even if they want to. This is because Death has decided he’s lonely and wants a wife (the “Cobweb Bride” of the title). The book has a good plot and people respond realistically to the new situation, including at least one “A God Am I” reaction from someone who thinks not being able to die is a good thing, but my enthusiasm is somewhat tempered by repetitive scenes, pages of “tell, don’t show” dialogue, and some … irritating … stylistic choices … such as the overuse … of … ellipses. (I sort of picture Shatner talking every time the author starts with all the ellipses in the speech.)

The action takes place in various mythical kingdoms, reference is made to the neighboring countries of France and Spain, which for some reason I found extremely jarring. I prefer the sort of approach Guy Gavriel Kay uses when he sets his action in France but calls it Arbonne, or in Italy but calls it Tigana (and, for good measure, changes it from a boot to a glove). But these annoyances have not been enough to make me stop reading the book … yet.

Meanwhile, speaking of books set partly in the real world and partly, um, elsewhere, editing on the next book, Television Man, is going along nicely. It seems I made at least one recent editing pass before on this book, probably back before Dragon Stones took off in the UK and I decided to switch over and finish up “Strings” instead, so it doesn’t need quite as much work as Shards/Ravels did. Maybe it’ll even be ready in less than a year or two!

Despite the pummeling she had taken, she didn’t feel injured, just confused. She was in some kind of small, dark room, a storm cellar maybe. The light was dim and flickering, as if provided by ample lightning strikes outside, but she didn’t see any windows that would let such light in. What she did see was what looked like an auditorium, a wide, open space beyond the shadowed nook where she had awakened. Had the tornado shot her out into a theatre?

Not quite a tornado, nameless main character. Not quite.