It’s been quite a while since I reached into my giant pile of rejection (and some acceptance) letters, so this week I spun up random.org to have it tell me which folder I should reach into. It selected folder I-J, from which I pulled an old contract from Hard Shell Word Factory (now an imprint of Mundania Press, home of some oddly specific genre categorizations), for the eBook rights to Night Watchman. “Hard Shell Word Factory” doesn’t belong in the I-J folder, of course, but, you know, sometimes things get misfiled. But anyway, I picked it, so here it is. Rather than reproducing all umpteen pages of the eBook contract, I thought I would just pull a few selected sections from it, which may serve as an interesting illumination of how the eBook world has changed since the year 2000 (or, as we called it back in those panic-stricken days, “Y2K”).

Exhibit A: It’s really a contract for Night Watchman. Also: You may be wondering, what other sort of download is there besides “electronic”? Well back in 2000 we all had matter reconstitution devices on our desks that could both download and upload physical objects to the Internet. But after the “TRON” incident, they were banned. 100% true story.

Exhibit B: The physical disk (disk!!!) version will have a higher price because of the “higher production cost”. Yet these days, the eBook edition frequently costs as much as the hardcover, and usually more than the paperback. Hmm.

Exhibit D: The Chapter? What Chapter? Also: Math is hard.

Exhibit E: I was an early supporter of the “yes please sell my book anywhere it’s possible to sell books” concept.

Exhibit G: E-book Reader Companies and their sales outlets!!! I honestly have no idea who this would have been back in the year 2000. Also: HSWF discourages eReader companies from raising prices. Amazon also tries to keep eBook prices low. Big publishers and Apple flip the bird at this concept and go to great lengths to raise eBook prices. Five or six years later, we all get Amazon store credits from the Apple eBooks Antitrust settlement, yet as previously noted, eBooks continue to cost as much or more than print editions. So we see who came out on top there.

Exhibit J: Look, I used to use Windows! And MS Word for writing manuscripts! Now I wouldn’t use Word to write manuscripts if you paid me. Well maybe I would if you paid me. But since you’re not paying me, I will continue to use Scrivener.

Exhibit K: Defective disks!!! This was a thing once. When working with software or an archive that spanned multiple disks, you were always guaranteed that one of the disks would be bad, and it would always be the next-to-last one. Also: Make sure you always have backups, kids! Good advice then, good advice now.

Exhibit L: Three free copies of each of the disk formats!!! And THE FULL DISK PACKAGING, too!!!

Exhibit M: Hmm, the earliest known example of “Teaser Tuesday“? Also: Crap, I have to get HSWF’s approval to excerpt my own book on my own site? Well, it’s not like anyone ever comes here, so I think I’m safe …

Exhibit N: Disk packages!!! Also: No giveaways. Giveaways used to only be for hippies and Communists. My how things have changed.

Exhibit O: Publisher don’t gotta do you no favors, pilgrim.

Exhibit P: The definition of “an attractive, up-to-date website” has changed since the year 2000. Also: To this day, no one is liable for site downtime or interrupted transmissions.

Exhibit Q: Holy crap, there’s my original URL! Borg.com was an early local dial-up (dial-up!!!) Internet provider in upstate New York. When I signed up with them I asked for the user name/URL “Scribbler”. I got “skribb19”. As the Offspring once said, “He asked for a thirteen but they drew a thirty-one.”

Also, speaking of the Y2K version of “an attractive, up-to-date website” … 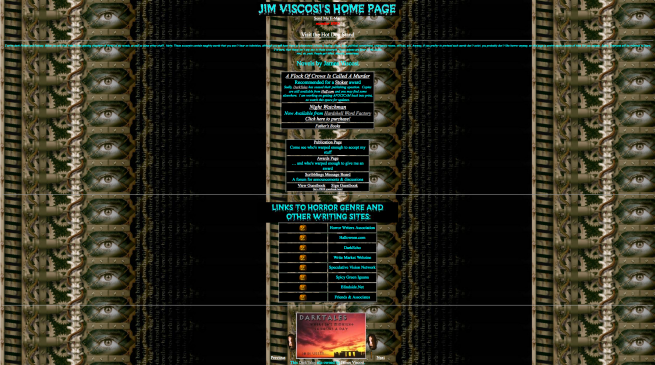 Incidentally, as long as we’re discussing ancient history, Dennis the Vizsla was not, in fact, the first Viscosi vizsla to grace the Internet with his presence. That honor goes to his brother Tucker, who had his own sub-page tucked away underneath my main horror author page. Because, you know, nothing says “horror author” like pictures of the world’s cutest puppy.

Meanwhile, speaking of Scrivener, I’m still in there plugging away on the latest edits to Father’s Books — which, as the astute observer may have noticed, this is listed as one of my books, there on my web site from the year 2000. Yep, Father’s Books is so old, it wasn’t even originally written in Word; it was written in PC-Write, and the filename was “fatbooks.jim” or something like that. 8.3 FTW, baby!

The house was quiet. It would be fine. It was daylight. There were four of them. Nothing was going to happen. Angry spirits were not going to come oozing up out of the heating vent and drag them all down to some basement hell.

Yeah. You just know everything is going to turn out fine when one of your characters is standing around thinking stuff like that …