So this week I’m reading a free Kindle book called Diary of the Displaced (Omnibus Edition), by Glynn James, in which an unfortunate fellow visits a gas station bathroom and then wakes up in a nightmarish alternate dimension populated by zombies, dog-things, giant snails, and a deranged dual-knife-wielding maniac who I suspect may be Jack the Ripper. I’m pretty sure he’s not Moonglum of Elwher; he’s much too tall. Anyway, if you needed another reason to avoid gas station bathrooms, there you go. 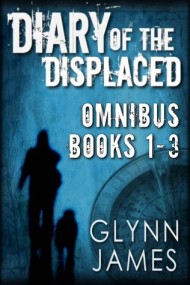 I moved the bicycle away from the wall. Years of gathered dust and sand fell from it. It had been here so long that both the chain and the steering column had seized up.

Hmm, sounds a little bit like my poor GT XCR-3000 out in the garage. In the “suspension of disbelief” category, I have no trouble believing that the main character woke up in an alternate dimension, that there are zombies and giant snails and dog-things, that his only companions are a ghost and a dog-thing, and that Jack the Ripper may have been an extra-dimensional slasher. But the fact that Our Hero keeps using gasoline in lanterns and hasn’t blown himself up yet drives me absolutely insane. Go figure. Speaking of people who wake up in alternate dimensions, let’s check in on our friends Mercy and Bernard and see where they are in the editing process of The War of the Ravels …

“You sure you must go during storm? Paths slippery.”
“We will be fine, Grun, really.”
“Ha! Of course you will. But if you fall off cliff, try not to take spyglass with you.”
“I think we’ll just try not to fall off any cliffs,” Mercy said.

Good thinking, Mercy! Let us know how that works out for you!