So this week the Moon+ Reader Random Book Selector told me it was time to read book two of The Mongoliad, by Neal Stephenson and a bunch of other people*. 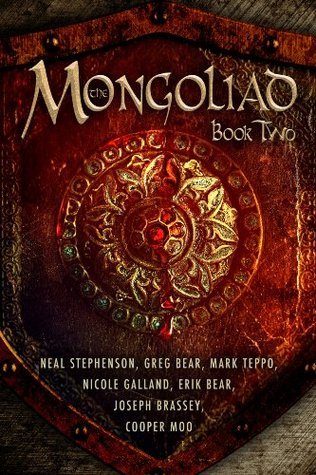 Previously Moon+ Reader had told me to read Book Five, which obviously I wasn’t going to do, since I hadn’t even read Book One yet.  But this time it picked the right number, so I went with it.

The harbingers of the Apocalypse—horse riders from the East—had come to Christendom. Those who survived the horrifying battle at Mohi—who were to bear witness to the rest of the West—were forever marked.

Ah, yes, harbingers of the Apocalypse:  Showing up for over 2,000 years, and always failing to get the job done.

Meanwhile, I’m continuing to edit Father’s Books, where there hasn’t been an apocalypse.  Yet.  But maybe there will be.  You never know ….

She went to the side door, rang the bell.  No answer.  She glanced off to the right, where a rather dilapidated convertible sports car sat near the garage.  Fuzzy dice dangled from the rear-view mirror; she hadn’t been aware you could still get such things.  Something so retro had to belong to a teenager, she thought.

Harbingers of the apocalypse may come and go, but fuzzy dice are forever.

*Neal Stephenson, Erik Bear, Greg Bear, Joseph Brassey, Nicole Galland (aka E.D. deBirmingham), Cooper Moo and Mark Teppo. I don’t know who contributed what and how much, so I’m just going to go with Neal Stephenson.