A few weeks ago I was putting something away in the closet and noticed the stack of old papers (writing, report cards, permanent records, etc.) that my folks sent out a while back, and I realized I hadn’t done an “Early Years” in, like, forever*. So I rummaged around in there looking for something fit to print. And lo! Here is something about being fit. Close enough.

This would be the AAHPER Youth Fitness Test, whatever that was. Well actually we don’t need to ask what it was. We can just look at the back page and see. Ooh, how quaint! Recording fitness with two tests at least 3 to 4 months apart? So much data! How could we ever quantify it? And it even has a chart! 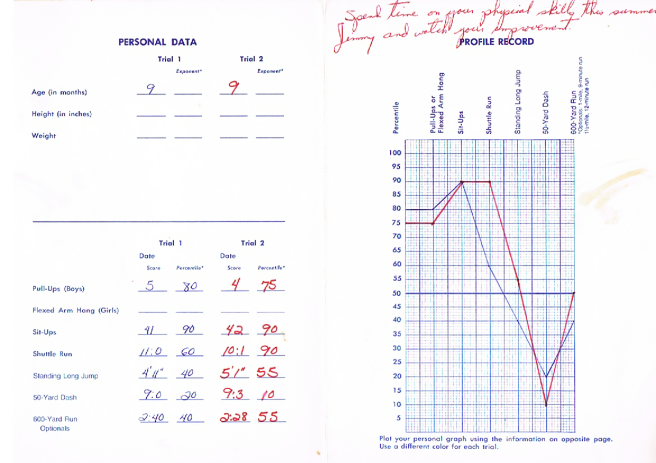 We didn’t need a Fitbit or an Apple Watch. We had a government program keeping track of our fitness!

A few stray observations re: this document:

I suspect that I did not, in fact, ask my physical education teacher to help me plan a program of activities to improve my fitness, but apparently one was offered anyway: “Spend time on your physical skills this summer”. Well, I most likely did that, if by “physical skills” we’re talking about riding my bike around outside, wandering in the woods, etc. I’m pretty sure I wouldn’t have spent any time doing pull-ups or sit-ups, unless you count the playing on the jungle gym we used to have in the backyard. Are they still called jungle gyms? Wikipedia says yes. It also says:

Large, metal, geometric-shaped jungle gyms were once common on playgrounds, but they sometimes led to injuries when children hit their heads on the bars or swung on them improperly, causing bruises, sprains, and fractures.

Uhh, yeah. Nothing like that ever happened to me. I never watered the grass under the jungle gym with blood from a gash in my head where it bashed into a screw or anything. Nope.

Anyway, whatever I did in between Trial 1 and Trial 2, it evidently did not do wonders for my showing in the 50-yard dash. I was probably just concealing my supersonic running abilities behind an intentionally shoddy performance, so as not to reveal my secret superhero identity.

* By which I mean September of 2017. Forever ain’t what it used to be.
** I looked it up and apparently it’s running sideways like a crab:

For some reason, I apparently kicked ass at that. Just don’t ask me to run forwards …

2 thoughts on “The Early Years: Jim Can Do Pull-Ups And Stuff, But You’d Better Hope He Doesn’t Have To Come Running To Save You”