So on July 4th, Netflix released the third season of their show Stranger Things:

The astute reader will have already reached the obvious conclusion that I would have dropped all the other shows and movies I’ve been watching in order to get through Stranger Things 3 as soon as possible.

Wife: “What movie is this?”
Me: “This is Stranger Things. It was just released today.”
Wife: “This is loud. We should watch it tonight.”

And thus it was that the initial viewing of Stranger Things 3 was deferred until the twilight hours of July 4th; and because my wife had to stay awake to supply Lulu and the cats with treats when firecrackers and M80s and whatever exploded outside, she was forced to watch some of it. And what, you may ask, was the first thing that struck her about Stranger Things? Was it the soundtrack full of 80s music? The Madonna haircuts? The mall full of bygone stores like Waldenbooks and Sam Goody and RadioShack? The 80s films appearing on this marquee, including, most awesomely, The Stuff***?

Nope. It was the character Will’s haircut, in this exact scene. (Will is the one on the left.)

Wife: “Didn’t you used to have a haircut like that? A bowl cut?”
Me: “Well, yeah. But everyone had haircuts like that.”
Wife: “I think you had a striped shirt like that, too.”

I can’t speak to the striped shirt, but as to the haircut …

So that was the first thing she noticed. The second thing? The lip gloss. On the boys.

I mean, okay, maybe Steve wasn’t in Duran Duran. But look at his hair. He certainly could have been.

So anyway, those were the two things my wife noticed about Stranger Things 3. Well, that, and this:

Wife: “This movie is weird.”
Me: “It’s not a movie, it’s a series.”
Wife: “It’s still weird.”
Me: “You just think that because you didn’t watch the first two seasons. I understand exactly what’s going on.”****

Stranger Things 3 would have put my wife to sleep almost immediately, except that, as previously noted, she had to stay awake to give treats to the animals. When viewing continued on a subsequent evening, with no treat requirements, the show performed as expected. She was out within 10-15 minutes. I, of course, stayed up and watched thre or four episodes in a row.

Oh, one other things: Remember a little while ago when I posted about subtitles? I of course watched Stranger Things 3 with them on as well, and can definitively state that I have never seen the word “squelching” appear so many times in them as I did with this series. Plus there was this little gem: 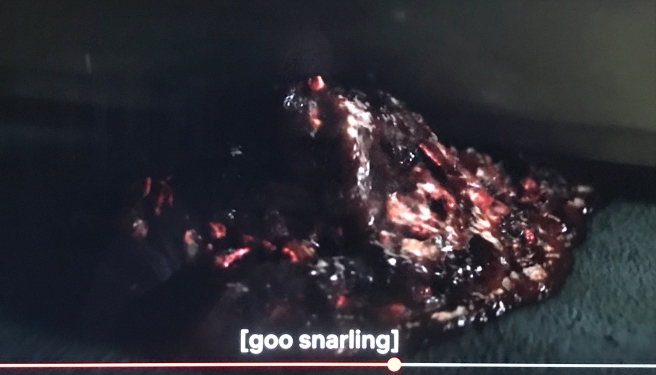 What is that goo? Why is it snarling? And what’s doing all that squelching, anyway? Well, to find that out, you’ll have to watch the show. (Here’s a hint, though: It’s not a CB radio operator.)

* The legal fireworks took place the evening of July 3, just over the hill from us. Fortunately, neither the legal nor illegal fireworks bothered Lulu very much. The cats, of course, couldn’t have cared less about any of it.

** Of course, you don’t have to be an idiot to set off fireworks. But if you’re setting off illegal fireworks in Southern California in the middle of summer, when everything around you is just waiting to go up in flames, well, it kind of pushes the needle in the “idiot” direction.

*** The tagline for The Stuff was, “Are you eating it, or is it eating you?” If you have seen that cult classic, t’s not much of a spoiler (for either thing) to say that, after an episode or two of Stranger Things 3, you’ll understand why it’s so totally appropriate that it shows up on the marquee.

8 thoughts on “Not A Review Of “Stranger Things 3””