So, this arrived in the mail last week: 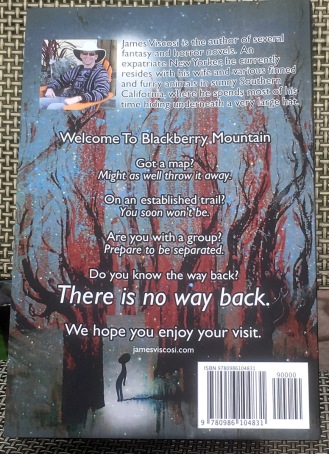 Yes, that’s the dead-tree version of the Amazon KDP version of Television Man, featuring the great artwork “The Unknown” from Émilie Léger.  Everyone who’s seen it loves this cover.  One person noted that the speckles in the drawing resemble static on a television screen; and, of course, the twisted red tendrils fit in exactly with the bramble forest where one of the characters spends an extended period of time.  It really couldn’t have fit better if it had been done specifically for the book.

The process of producing a print book went much faster this time than ever before, because of all the time I spent on it getting Shards and Ravels ready, and most especially because of Scrivener, which remembers all the settings I finally came up with to produce a workable ebook and printed book interior.  I can’t recommend it highly enough as a writing tool.  Seriously, if you can, get it.  It’s ever so much better than just using a word processor to put a book together.

The astute reader may be thinking that if I have a copy of the paperback, he or she can perhaps obtain one, too.  This is technically true―I gave Amazon’s new beta KDP print publishing service a whirl this time, instead of using their separate CreateSpace service, and one of the current vagaries of the beta service is that there’s no pre-publication proof, which means that if I can get a copy, anyone can get a copy―but there’s a small issue with the interior.  “Small” being the description of the interior margin, or gutter:

It appears that the interior margin was reduced during the printing process from the 0.75″ in the file I generated from Scrivener to a standard all-around margin of 0.5″.  This is fine for the outer margins, but I think it puts the interior text too close to the binding, meaning you have to stretch the book farther open to read it than I think you should.  I pointed this out to my wife while she was examining the finished product.

That’s the reaction I’ve gotten from others who have looked at the printed copy―once I mention the small gutter, they see it, but before I mention it, they don’t.  But what can I say?

Anyway, I’m working with the folks at the KDP service to figure out what happened with the gutter and get it corrected.  Until then, if you are a paper book kind of person, I’d hold off on acquiring this item for now.  Although no one who has seen the book has noticed that the interior margin is a bit too small until I bring it up, it bugs me, and it might bug you, too.  I might even go so far as to pull the paperback listing, if I thought there were likely to be people lining up to buy it.  Ah, wouldn’t that be a nice problem to have!

Just like last time, I am doing an ePub and non-Amazon print version through IngramSpark.  Those files are still under review at Ingram (which does over a pre-publication author proof and which will, I suspect, handle the gutter correctly), so they’re not available yet, but they’ll be coming soon.  While I’m waiting for Ingram, I thought I would put Television Man into Amazon’s Kindle Unlimited program, the first of my ebooks where I’ve done so.  I’m not planning to leave it there―even though 99% of my ebook sales have been for the Kindle, I still object on principle to the “available in the Kindle store only” exclusivity that the KU program requires―but since I don’t have the book ready anywhere else yet, I figured why not.  Who knows.  Maybe I’ll make soooo much money from Kindle Unlimited that I’ll decide to sell out.

So anyway, that’s where we are!  There’s a print book, but, uh, I wouldn’t order it yet if I were you.  Unless small margins don’t bother you, or you just like looking at pretty covers, in which case, go for it!

5 thoughts on “Of Pixels And Dead Trees”