This week I’m reading The Hole Behind Midnight, by Clinton J. Boomer, in which Royden Poole, a dwarf (or possibly a midget), gets involved in a conspiracy taking place in the Sideways*, AKA the 25th hour, a place that exists in the second between 11:59:59pm and 12:00:00am, and which can be accessed from locations that are abandoned by or don’t receive much attention from humans, such as your corner video store or my web site. 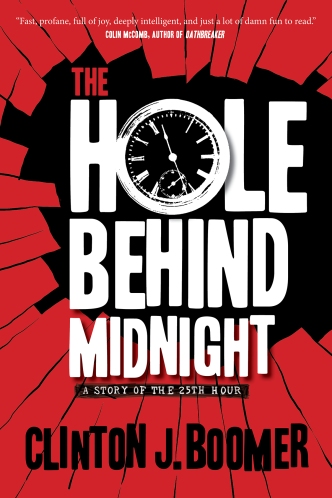 Despite only lasting a second, there’s plenty of time for conspiracies in the 25th hour, because, as Poole notes at one point, there is an infinity of very small numbers between 59:59 and 00:00; as long as you’re careful, you can keep stretching those very small numbers out into a permanent midnight. Zeno would approve. So would Saucy Monky.

Of course, when you’re somewhere as abnormal as the Sideways, you can expect to run into, uh, Abnormalities.

It spit something at me, faster than I had time to react. A wet, jagged sliver of bone, like an over-sized knitting needle, bounced off my chest harmlessly. It hit the ground, twitched itself into a shape halfway between a comic-book lightning bolt and the world’s nastiest fishhook, and then lay very still with a line of web-like saliva running out the back of it in a slick trail to the thing’s inner jaws.

The monster looked a little surprised.

So a good rule of thumb: If you’re going to an alternate dimension full of striges or things that might shoot webbed fishhooks at you … wear a bulletproof vest, or the magical equivalent thereof. Even if, as was noted in the film “Running Scared“, such things aren’t very effective if you get shot in the face.

Meanwhile, speaking of things that bulletproof vests won’t protect you from, editing continues on Father’s Books:

She froze in front of Richard, shoulders trembling. She turned around and her face was pale and furious. She handed her keys to Richard and said, “Wait in the car.”

As he squeezed himself back into Rose’s little car, Richard gave thanks that he wasn’t going to be on the receiving end of the impending explosion.

* Not to be confused with the Upside-Down, which is, presumably, underneath the Sideways.