This week (and probably next week …) I’m reading The Adventures of Fafhrd and the Gray Mouser, by Fritz Leiber, a “box set” (insofar as anything on an eReader is a “box set”) comprising Swords and Deviltry, Swords Against Death, and Swords in the Mist. 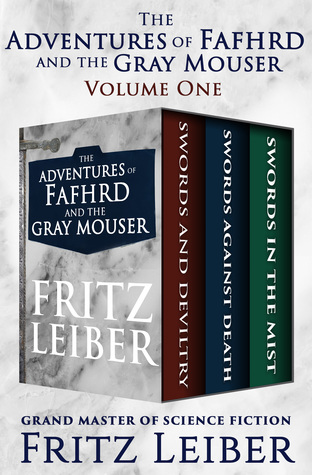 Although this series is considered a seminal fantasy classic, I never got around to reading it, and my main familiarity with it is the Nehwon entries in my old Dungeons & Dragons book Deities & Demigods — not, sadly, the collectible edition that still had the Cthulhu and Melnibonean entries, though it did still have the other historical mythos in it, such as the gods of Ancient Egypt, Greece, Viking regions, the Aztecs, and Sumeria.

Anyway, having read Deities & Demigods umpteen times, regardless of how the characters are actually described, I always picture them like this: 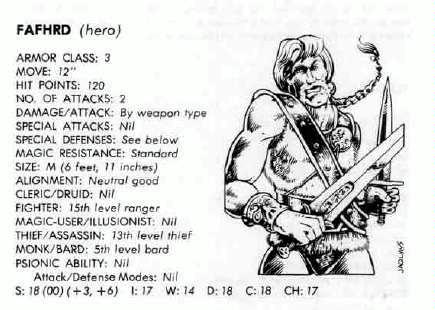 Given that the first book starts with Fafhrd in his icy mountainous homeland, I can only assume he’s wearing more clothes than in the picture; and I would guess the Gray Mouser doesn’t always have a dagger twirling on his fingertip, but how awesome would it be if he did?

Entering his home tent, he felt again like a ghost and made as little noise as one. The odors of home comforted him uncomfortably and against his will; smells of meat, cooking, old smoke, hides, sweat, the chamber pot, Mor’s faint, sour-sweet stench.

Yeah, nothing says “home” like the smell of the chamber pot. Umm, excuse me while I go check on the litter pans …

He had brought the camcorder into the tent to protect it from the storm, lowering the tripod so it would fit. If he dressed it up in a hat and a fake beard it would look like a garden gnome.

Ah, yes, the mid-90s, when if you wanted to record video, you had to haul around a specialized device that wrote data onto tapes. How quaint!

One thought on “Teaser Tuesday: “The Adventures of Fafhrd and the Gray Mouser””