So after getting those encouraging letters from the editor at Eclipse, I had to actually produce the scripts. Fortunately that wasn’t a problem; I was pretty prolific back in the day. However, formatting was an issue. From reading reference books (in 1993, you couldn’t just hop on the Internet to find examples of comic book script layouts), I was aware that when submitting comic book scripts as a writer, you have to format them similarly to a movie script, with the action divided into panels. You have to supply POVs, camera angles, etc., and each line of dialogue is numbered; this is all so the artist will know how to arrange everything on the page.

As you can see from the Eclipse editor’s copious notes, in this early Night Watchman draft, I wasn’t very good at any of that yet. 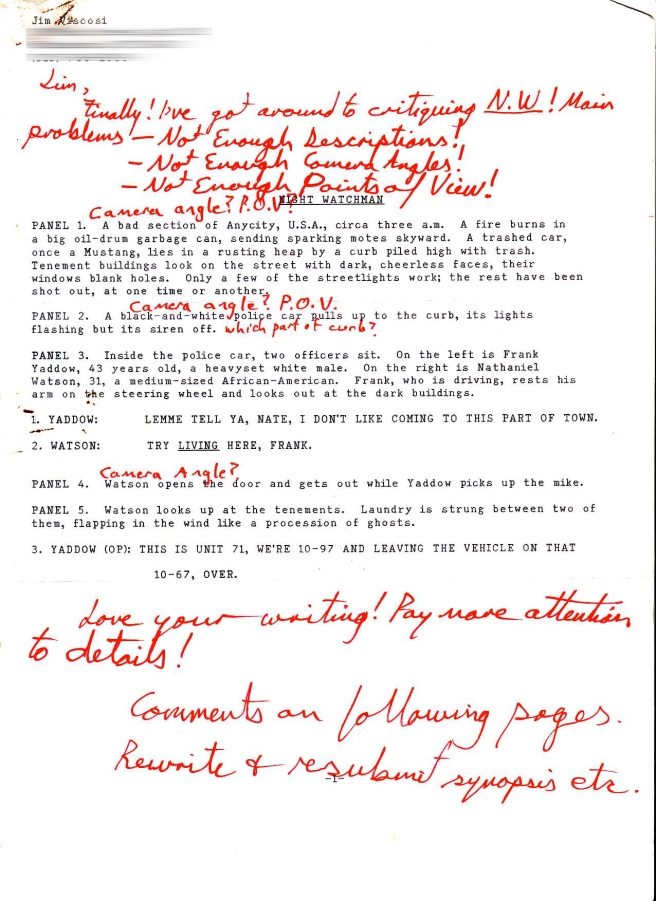 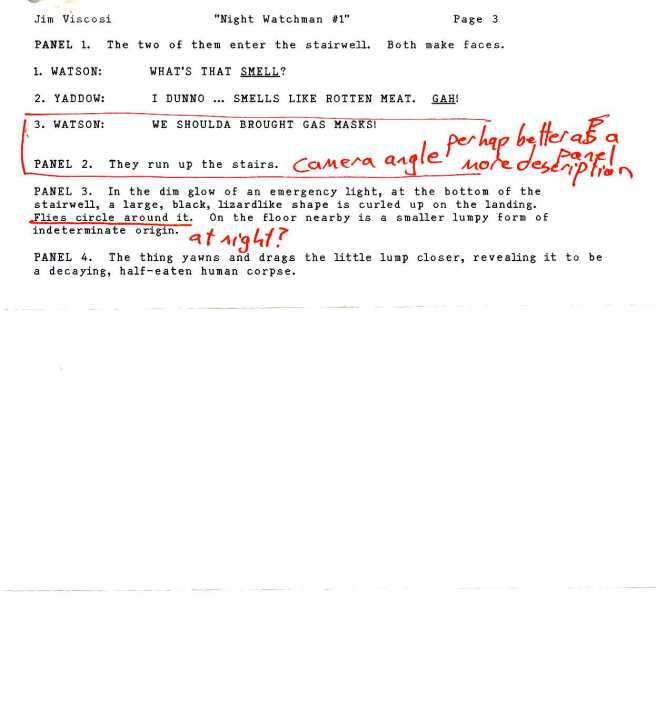 I thought it might be interesting to contrast those panels with the same scene as it appears in the novelization of Night Watchman, as shown below:

One-fifty in the morning. Police officers Nate Watson and Franklin Yaddow respond to a call from Canal Street. They cruise slowly along the pockmarked road. Nate Watson looks out the window, watches the derelict buildings as they pass. It’s getting so he can’t tell the empty ones from the occupied ones anymore. Buildings are getting so run-down, they could all be abandoned and it wouldn’t surprise him.

They pass the wide empty lot where the Wright Project used to be. It’s become a big campsite for indigents. They get old oil cans as fireplaces and burn any wood they can find; they also burn garbage, old tires, anything that’ll hold a flame. Nate watches them standing around the fire, silhouettes holding out their hands to catch the warmth, and he thinks that ten thousand years ago humans were a bunch of grubby vagrants sitting around makeshift fireplaces and after nearly a dozen millennia things are heading that way again.

“This is the place,” says Frank. He guides the patrol car over to the curb in front of a decaying tenement. It looks like it might have been habitable once, with rugged sandstone walls and a front stair that spills down to the sidewalk in a graceful arc. The steps used to be white, though now they’re stained with piss and paint and the subtle pattern carved into the banister is chipped and broken. The windows are all covered with black bars, iron ones, bolted onto the aging structure with bullet-sized studs. Nate thinks of a person with black iron bars over his eyes, attached to his orbital ridges right around the socket.

Frank parks behind the burned-out shell of a car. It looks like an old Mustang, Nate isn’t sure; much of the vehicle is gone, picked clean like a carcass out in the savannah. No one is ever going to bother towing it away, so it makes a good landmark in this part of Island City. Just call it the Mustang Arms, thinks Nate.

Frank radios the dispatcher that they’ve arrived and they get out of the car, Frank first, then Nate. They lock the doors. Frank pauses, looking up at the darkened tenement, and says, “Lemme tell ya, Nate, I don’t like working this part of town.”

Nate sees something in the Mustang and flicks on his flashlight, shining it through the hole where the passenger side window used to be. It’s a vagrant, sleeping on the musty remains of the driver’s seat. Nate flicks off the light before waking the guy. He wonders if maybe the car belongs to the snoring derelict inside it, if the man had something once, was something.

Frank is at the foot of the stairs, gesturing at Nate to follow. He joins his partner and they climb the steps together. The moon goes behind a cloud; the sky is full of them tonight, dark and thick, like floating chunks of concrete. The stairs are marble. Maybe once, years ago, ladies in fur coats came down these steps led by little dogs on leashes and stepped into waiting cabs.

Frank pushes open the front door. The hall lights are out. They flick on their flashlights to guide their way. The floor is strewn with crap, newspapers and fast-food wrappers and beer cans, stuff that crunches and crackles as they slog through it. Nate thinks about getting hepatitis shots tomorrow.

He doesn’t know, yet, that he has no tomorrow.

The building has elevators. They’re in a little nook halfway down the hallway, two doors opening onto the shafts. One door is half-open like a lazy eye; inside it’s dark, with no elevator in evidence. The other door is closed. Both doors are riddled with holes. It looks as if somebody stood here one night stabbing the thin metal over and over again with a big screwdriver. The button plate is detached from the wall and hangs down by a tangle of wires. Maybe the guy with the screwdriver got bored with the doors and decided to disassemble the elevator system. Nate thinks of an eyeball plucked from its socket and left dangling by the nerves.

Frank lifts the plate, looks at it, and swears.

The stairs are right behind them. They enter the well and start climbing toward the fourth floor. The atmosphere is stale and fetid, like a bathroom that’s never been cleaned or aired out. Somewhere below them someone’s murmuring something rhythmic, singing or chanting, maybe even humming. Nate finds it hard to imagine someone humming in this environment.

Frank takes the stairs stiffly. Nate has to pause now and again so he doesn’t get too far ahead.

“Doo-be-doo-dah,” sings the voice from below.

Did all the marking up on this script discourage me? Of course not! Tune in week after next (next week being the “Scene Of The Month”, of course) for Part III of the Eclipse Comics Saga, in which I send Eclipse all sorts of ideas for other series, and they send me a guide for formatting my scripts. An editor who was willing to work with me to improve my submissions — Nirvana!

Speaking of next week, don’t forget to vote for the scene of the month! Last week Dragon Stones managed to upset The Wolf, the long-running readers’ choice. Will The Wolf reclaim its crown? Stay tuned to find out!