As noted in previous installments, I spent a lot of time on Thursday and Friday being unconscious or semi-conscious, and I wasn’t enjoying it very much. When I had been passed out in the living room on Thursday, and for the next several days after that, every time I fell asleep, I experienced very unusual dreams.

My dreams, which I can usually remember in detail, at least for a while, have always been very busy and often chaotic; it’s typical for me to dream about various manners of apocalypse (brought on by zombies, alien invasions, meteor impacts, etc.), natural disasters (volcanic eruptions and tornado swarms are a couple of favorites), odd science fiction/space sagas, trips to strange places, that sort of thing. Sometimes they’re just absurd, like the time I dreamed I was a battery and was trying to escape from people who were trying to stick me in a giant Walkman. (Back in college, a friend once said to me, “It’s not fair you get to be entertained every time you go to sleep.”)

The dreams I had after the subarachnoid hemorrhage were not like my normal dreams at all. The only way I can describe them is empty. When I was on the floor in the living room, I dreamed I was in a completely abandoned city, like an industrial section, full of vacant buildings. Everything was wet—there were puddles everywhere—but there were no people or animals and no sound except the wind. Other sorts of things I dreamed about during this period were a highway with no cars or people on it, an empty bridge, and an abandoned railroad line in some kind of grassy wasteland. Sometimes there was only darkness. There was always a sound of wind, but nothing was happening in any of these dreams, ever. It was just me, walking alone. These were far and away the most disturbing dreams I’ve ever had, just because of their sheer emptiness, and I hope never to experience them again.

The Saturday following the surgery to repair my brain aneurysm was when those dreams started to fade. Probably not coincidentally, that was also the first day when I was back to being at least sort-of conscious for more than a few consecutive minutes (though I wouldn’t confess to feeling “almost human for a little while again” until Sunday). It was a period of nearly round-the-clock visitors, as close friends stayed with me for hours at a time, giving my wife the opportunity to go home, have a shower, attempt (not very successfully) to get some sleep, take care of the animals, that sort of thing. She also ran a few errands.

Wife: “Do you want me to bring you anything from home?”
Me: “Charlee. But I don’t think she would like it here very much.”
Wife: “No, she wouldn’t, but Chaplin would be swinging from your IV and climbing the monitoring stand.”

Needless to say, my wife did not bring me Charlee, but she did return with a bag of stuff she had gotten from Barnes & Noble, including a stress squeeze ball (I had plenty of stress, but not a lot of strength for squeezing), a fuzzy llama (which Chaplin later tried to abduct), a dinosaur made out of those currently ubiquitous color-changing sequins, a colorful, quasi-Japanese rabbit, and a fuzzy gnome that I dubbed “Substitute Charlee”:

I amused myself with all of them for a while but Substitute Charlee quickly became a favorite; I kept him in bed with me and brought him along to radiology for repeat CT scans and that sort of thing. (If any of the hospital staff thought this was odd, nobody said so; I mean, a 50-year-old subarachnoid hemorrhage patient carrying a fuzzy gnome around the hospital is hardly something weird or outlandish like, say, calling 911 while you’re in your pajamas would be.)

My wife, on the other hand, was most fascinated by this little guy:

Wife: “It reminds me of that movie you watched. There was a squirrel who was trying to solve a mystery or something.”
Me: “Oh, yeah, Detective Pikachu.”
Wife: “No, not that. He had a machine gun or something and he flew around in a spaceship.”
Me (pause): “Are you talking about Rocket from Guardians of the Galaxy?”
Wife: “Yeah, that’s it. He was a squirrel or something right?”
Me: “Well he’s a raccoon, but the Asgardians think he’s a rabbit, and Tony Stark thought he was a Build-a-Bear.”

I guess Guardians of the Galaxy is not a bad place to expect to see something like that little guy turn up, but for my money I still say he totally wandered out of Detective Pikachu.

Over the weekend I thought I was doing pretty well with the talking and the visiting and stuff but I’ve since been told my conversations remained pretty short during this period. I would talk for a while and then fall asleep. (This is not how I remember it.) At least I was sounding more like myself, I think.

Friend #2: “I was telling my friends up north about what happened to you. I said, he’s the healthiest person I know! He eats well, he exercises, he’s not overweight. I don’t understand it.”
Me: “I know, right? What the fuck?” (glares at ceiling) “Fuck it. From now on, pizza for dinner every night.”*

And as part of that same conversation, or one around the same time (they all kind of ran together in my mind):

This weekend was also when I learned what the question about my favorite colors had been all about:

The item in question was an orange and purple “Get Well Soon!” poster done by Friend #1, Friend #3, and their daughter, as well as a Halloween-themed “Enter If You Dare!” poster that I probably should have posted on the door to discourage the nurses from waking me up for medication and neurological testing every few hours. But I doubt it would have worked. 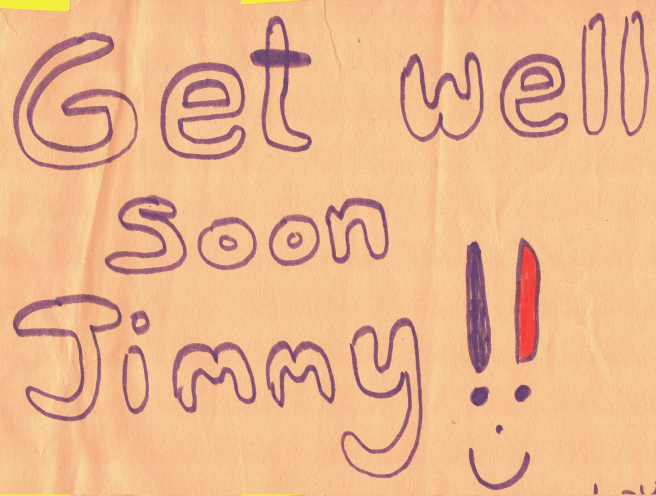 These posters, along with other get-well cards and pictures of The Oceanside Animals, became part of the wall art that followed me around for the rest of my hospital stay.

On Saturday, I started to get an inkling that Friend #2 was right about how long I would be in the hospital. Some time that day, one of the neurosurgeons who had been involved in the surgery stopped by to see how I was doing. This was not a doctor I remembered—I was evidently unconscious, or at least pretty well out of it, the first time we met—so this was basically like seeing him for the first time. (This was a recurring scenario for days, until I finally became reacquainted with everyone who had taken care of me over the first few days of The Event.)

Me: “Thank you for saving my life and stuff.”
Doctor (shrugs): “It was a team effort.”

The doctor and I talked for a while and a little later on Nurse #1 came in to give me an overview of my upcoming treatment plan. The briefing went something like this:

Nurse #1 (drawing illustrative pictures on window with erasable marker): “Bleeding into your brain irritates the other blood vessels and arteries and that can cause problems. There isn’t supposed to be blood in there, just cerebrospinal fluid. We’re keeping you here in ICU because we need to titrate your medication to keep your blood pressure within very narrow limits. You’re going to be taking a medication called nemodipine to help prevent any further strokes from occurring. You’re also going to be getting twenty-one days of transcranial dopplers to monitor you for vasospasms.”
Me: “So … am I going to be coming back in for the trans-cranial dopplers on an outpatient basis after I get discharged?”
Nurse #1: (looks at me with a tight-lipped little smile)
Me: “Oh.”

So that was when I learned a couple more new concepts, such as transcranial doppler and vasospasm and you’re going to be in ICU for a good long time.

Nurse #1: “I know twenty-one days is a long time to be in ICU when you’re alert and awake. Usually after something like this people are in ICU for forty or fifty days but they’re barely conscious. It’s really a miracle that you’re doing this well and twenty-one days isn’t that long measured against the rest of a lifetime, is it?”

Well, when you put it that way … No, no it’s not. The whole situation still didn’t seem quite like it could be happening to me, but it was starting to sink in that something very serious had occurred.

Me: “Boy, that really blindsided me on an idle Tuesday.”
Wife: (starts to get nervous because she thinks I don’t know what day of the week it is)
Me: “Don’t worry, I’m just quoting the Sunscreen Song.”

So sayeth the Sunscreen Song: “Don’t worry about the future; or worry, but know that worrying is as effective as trying to solve an algebra equation by chewing bubblegum. The real troubles in your life are apt to be things that never crossed your worried mind; the kind that blindside you at 4 PM on some idle Tuesday.”

Or at 8:45am on a Thursday before work. Same idea.

At this point, because it was starting to seem like I probably wasn’t going to die soon, my friends were getting a little more comfortable joking around with me, which was oddly comforting. For instance, after hearing that the doctors had said it was likely to be months before I would return to work, one of my friends said this:

There are a couple other things that happened over the weekend that I remember for sure what day they occurred:

* I have not actually started having pizza for dinner every night.
** I always misquote Blazing Saddles this way; it was not a side effect of my subarachnoid hemorrhage.
*** Do not attend this seminar.