So over the past several years I’ve posted various scenarios I created for the Buffy the Vampire Slayer board game, featuring such neglected villains as Angel, Dracula, the Gentlemen, Ethan Rayne, and Glorificus (that last scenario having been created by Jeff Dee, with small modifications by myself). But now, like the show itself, we must come to the end of our run of Buffy episodes. Never having written a scenario for the final Big Bad, the First Evil, I’m wrapping things up one season before the show did, with Dark Willow, the Final Boss of Season Six. And what a bad boss she was.

END_OF_DOCUMENT_TOKEN_TO_BE_REPLACED

Regular readers of this blog―i.e., my parents―may have noticed that there was no post here last week. That’s because on Thursday, December 7, we got out of town as the Lilac Fire advanced on our house. At the time we left, the fire had charred a path nine miles long in a single afternoon. Officials were saying there was a good chance the fire would go all the way to the ocean. And what was directly between the fire and the ocean?

END_OF_DOCUMENT_TOKEN_TO_BE_REPLACED

As I’ve mentioned previously, and to no one’s surprise, I used to be quite a fan of the “Buffy the Vampire Slayer” television show, as well as the board game tie-in from Hasbro. The game only had scenarios for the first four seasons, with one “Big Bad” from each:

Naturally, being an old D&D Dungeon Master from way back in the day, I eventually made some of my own scenarios. I’ve previously posted the ones I did for Angelus (who―spoiler alert—was the actual Big Bad of season two), Ethan Rayne (for the “Halloween” eposide), the Gentlemen (from “Hush”), and Dracula (“Buffy vs. Dracula”). When I posted the Dracula scenario, I mentioned that the next one would be for Glorificus, AKA Glory, the biggest Big Bad from the show.

Now, just in time for Halloween, here she is.

END_OF_DOCUMENT_TOKEN_TO_BE_REPLACED

A while back I posted an Angelus scenario for the “Buffy the Vampire Slayer” board game from Hasbro, which eventually drew a comment from a fellow Buffy show and board game fan who praised the scenario for being so in tune with the spirit of the show. I replied to this reader that I had a number of other “Buffy” scenarios that I had created, and said that I would post them over the course of the last few months. So far I’ve posted my scenarios for the episodes “Halloween” and “Hush“, but I’m still not done! Here is my scenario for the episode in which Buffy went up against the most notorious vampire of all. And no, it’s not this one:

END_OF_DOCUMENT_TOKEN_TO_BE_REPLACED

So a while back I had posted an “Angelus” scenario for the “Buffy the Vampire Slayer” board game. A fellow “Buffy” board game player commented that the scenario captured the spirit of the game better than any other “Angelus” scenario she had read (apparently there are a lot of “Angelus” scenarios out there), so I said that I would post the few other scenarios I had created, back over a decade ago, when I apparently had time to do things like that. Previously I posted a “Halloween” scenario, based on an episode that was mostly notable because it introduced recurring villain Ethan Rayne and also had this guy Oz start to notice this girl named Willow, who seemed to always be involved in shenanigans. Here’s another one, for the episode “Hush“, which is widely considered one of the best episode of “Buffy”, or, indeed, of, well, any show, ever. Because if you’re going to tackle converting an episode into a game scenario, you might as well aim high. No, higher than that. No, keep going …

END_OF_DOCUMENT_TOKEN_TO_BE_REPLACED

Having recently finished (more or less) getting Television Man out the door, I’m taking a little break before starting my next project (because of course I have one) to do something I haven’t done in the past — ask indie book blogs for reviews.  For those who might be looking to do the same, there’s a good list of indie book reviewers at The Indie View, sortable by date, searchable by genre, that you can use as a resource to find people who might be interested in writing a few words about your novel.  None of the review sites listed at The Indie View charge for reviews.

END_OF_DOCUMENT_TOKEN_TO_BE_REPLACED

So the other week  I watched “Abraham Lincoln: Vampire Hunter“.

Me:  <loading disc into player>
Wife: “What’s this?”
Me:  “‘Abraham Lincoln: Vampire Hunter’.”
Wife: “You were serious about that?”

END_OF_DOCUMENT_TOKEN_TO_BE_REPLACED 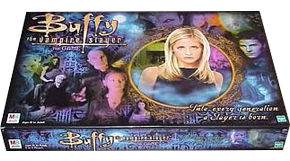 END_OF_DOCUMENT_TOKEN_TO_BE_REPLACED

So this week I’m reading Jazz Funeral, by Julie Smith, a murder mystery set in New Orleans. This is book #3 in a series featuring detective Skip Langdon. Since I got it for free off the BookBub mailing list, I didn’t have the luxury of going back and starting at book #1, but so far that doesn’t seem like a big deal. 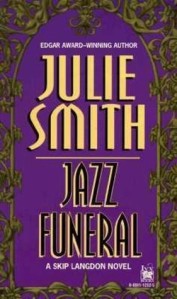 END_OF_DOCUMENT_TOKEN_TO_BE_REPLACED

This week I’m reading Death’s Hand, by S.M. Reine, in which Buffy and her watcher Giles try to stop Glorificus the hell-goddess from destroying the … oh, wait, sorry, that was Season 5 of “Buffy the Vampire Slayer“. No, in Death’s Hand, the kopis (AKA sword) Elise and her aspis (AKA shield) James are trying to stop a hell-goddess from destroying the world by letting her Armageddon Clock get to midnight. This naturally involves fighting hordes of zombies, demons, ghosts, and at least one necromancer. Apparently no one told them they could just pay 4 mana to remove counters from the Armageddon Clock during anyone’s upkeep. 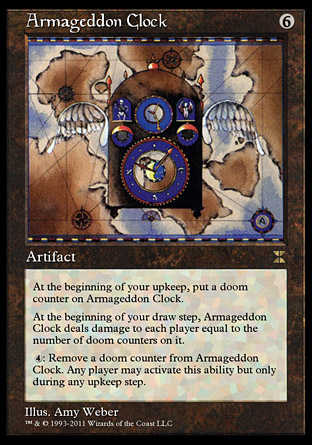